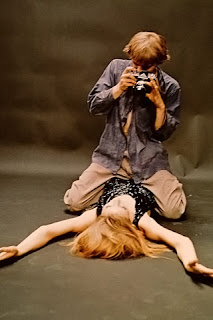 Perhaps the first modern (read: decadent, drug-fueled, hypersexual..fun) look at fashion, and the first British film to show full frontal female nudity (somehow related...?), Michelangelo Antonioni's Blow-Up is also a glamorous homage to London's swinging 60s. In one of the film's most famous scenes, Veruschka, all 73 inches and eight pounds of her, writhes on the floor and is straddled by her curiously comely photographer:

Then there's this little gem: