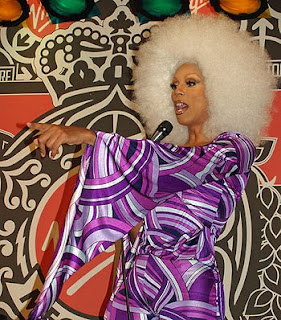 Can't we all just get along? Fabulously?

I don’t like to step up on my soapbox usually, unless it’s for an impromptu musical rendition of Genet’s The Maids, but I was just so disappointed after reading this article and its subsequent reader comments that I had to set the music aside. Albeit briefly.

There’s a lot of inequality in this country. Hell, inequality and hypocrisy are the foundations of this great nation. The only way to combat these seedy elements is through understanding and mutual action. We must all want equality and understand its necessity in a civilized world. That some people don’t see this to this day is troubling, but understandable. After all, 71% of Republicans would vote for this woman for President come next election.

There’s an obvious, rampant lack of knowledge in this country.

But why, in a world where seemingly anything is possible – hi – is the idea of freedom and equality not a reality? There are too many answers and not any of them are good enough. It’s simply human nature (why…why?) to oppress and to destroy, to hate and to fear the unknown or the different.

However, strides against human nature have proved effective over the years – the blacks can vote, the gays can reign o’er their own parade, TRANNIES (YAY!) – but there’s still so much work to be done. None of it will get accomplished, though, if there is no cooperation.

To compare one civil rights movement – the Blacks – to another – the Gays – is detrimental to both movements and, let’s put the cards on the table, just fucking stupid.

Does it matter who’s suffered more, who’s been around longer, who hates The Man more? That’s not the point. The point is there is injustice in society and that is completely unacceptable. It’s a shame that blacks and gays seemingly can’t see eye to eye. It’s down right tragic that these insignificant differences – skin color, sexual preference, et al — have a bearing on the worth of a human being.

Personally, as a member of both communities, I can’t stand either of them. I’ve never felt a part of one or the other nor do I want to. Black people can often be intolerant and the gays can quite often be racist. And unapologetically so. If you’ve ever seen online profiles with “no blacks, no fats, no femmes, no Asians” you’d understand.

To hell with both of them, I say!

I now identify with one, and only one, minority and it’s the only one that matters: the Fierce. We are a proud, wise people – a nation with no geographic boundaries, a rhythm nation, if you will – who don’t ask for your acceptance or your charity. We just ask you get the fuck out of our way when we’re stalking down the street in a vintage sequined halter-bodysuit.

Now, having gotten that off my bony chest, let the music play!