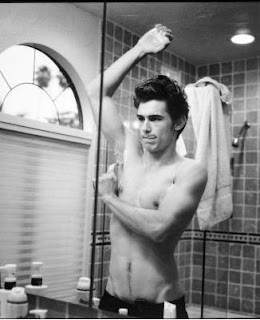 Ever since our gay boyfriends--the loves of our empty though immaculate lives--have developed unsightly facial hair or have met with tragic ends, we like to cling to any hope that the love that dare not speak its name would whisper a little louder through the deep closets of Filmtown, U.S.A. To the rescue is none other than the dreamy-eyed, hollow-cheeked noted heterosexual and non-pot smoker, Jim Franco. Between his overlooked but captivating performance boinking Sean Penn in last year's Milk, to his future Oscar-nominated turn as sodomite and down-right curmudgeon, Allen Ginsberg in next year's Howl, Franco's been filming naked boys playing basketball. Don't just come out of the closet, dear. Kick the motherfucking doors down.
| More
Posted by arms.akimbo at 2:26 PM