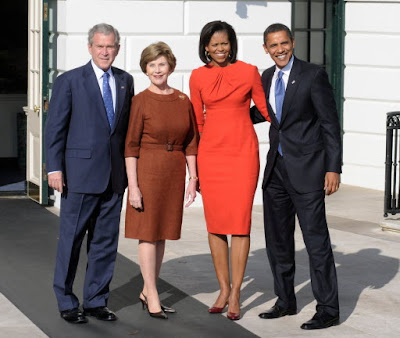 It's like day and night, right? Of course the day is full of dull, tedious work, while the night holds a chic dinner party with an open bar.

Already a lot has been said about Michelle Obama ascending to the haute couture throne left vacant by Jackie O some forty-five years ago, and though all this chatter does in effect take away from the intelligence and impressive credentials of the future First Lady by focusing so heavily on her outward appearance, is that not the price one has to pay for being a public figure? The Obama's are now a major part of the cultural zeitgeist, more than any political family since, yes of course, the Kennedys. And why wouldn't they be; they're young, they're intelligent and they're attractive. Oh, and black, if you hadn't noticed. So with all this focus being placed on what MiMi (I'm trying out new nicknames) and her proclivity towards young, up and coming designers like Thakoon Panichgul, Isabel Toledo and Maria Pinto, instead of tried and true favorites like Oscar, Michael and Ralph, much more focus will be placed on DC and its role in fashion. And Chelly (how do we feel about that one?) is more than equipped to broadly shoulder that responsibility. Girl loves and knows her jewel tones and flattering silhouettes. Her style will inspire and influence that of other political wives as well as women the world over. Personally, I'm already rethinking the kitten heel, once the bane of my existence. DC will never usurp New York as America's reigning fashion capital; there are too many things to focus on, such as the crumbling economy, the neverending war, the complete lack of respect and cooperation of the international community, etc, but that city is about to get a major makeover. Cue the dressing room montage set to Madonna's "Dress You Up in My Love!" Ooh, go head DC, you're looking fierce in that Narcisso Rodriguez, city-girl!
| More
Posted by arms.akimbo at 10:22 AM