It Is Severe Up In Here 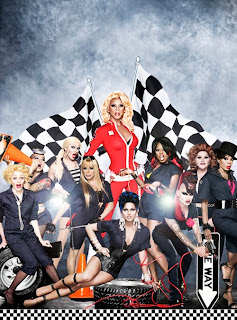 RuPaul's Drag Race, our official new obsession, premiered last night on Logo. The show, in which nine drag queens from around the country compete for a series of unspectacular prizes, is a blatant rip-off/hodgepodge of America's Next Top Model and Project Runway, with just a dash of American Idol. Drag Race, however, manages to outdo all three simply by not taking itself too seriously.

At the magnificently well-lit center of it all is RuPaul, supermodel of the world. In drag, she is Top Model Tyra -- just a hell of a lot thinner and let's face it, more stunning than TyTy was even in her 90s heyday -- delivering each show's Shemail with delicious tongue in cheek. Out of drag, she is part Tim Gunn, supervising over the ladies' challenges (the first, Drag on a Dime, definitely reminiscent of at least three episodes of Runway), offering guidance and wisdom ("You feature the back door a lot, don't you?") and part Mr. Jay, adding colorful commentary to photoshoots ("Pull up to the bumper, honey").

After all the drama and all the fierceness, and my is there fierceness, Ru sashays and shauntays down the runway to join her fellow judges, including her own in-house hunk photog, Mike Ruiz and special guest judge, diva designer Bob Mackie (!!!). The winner of the first competition, the incredible Nina Flowers -- giving face and body during her shoot then expertly pulling off an albino Janet Jackson/punk rock/Road Warrior look -- got to shuntay and stay. Meanwhile, loser, big girl Victoria Parker, had to sashay away for not bringing it during the lip-synch for your life challenge to Ru's own "Supermodel (You Better Work)".

There will be gagging.
| More
Posted by arms.akimbo at 2:30 PM