Model, designer, muse and socialite Maxime de la Falaise died of natural causes last week at her home in France. An inspiration to AnA for her career, attitude, and various last names, the lady is best remembered through this fabulous New York Times obituary which reads as a who's-who of the fashion world. 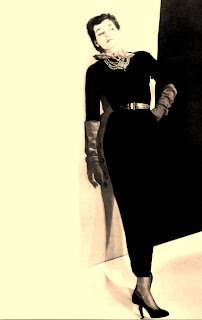 Maxime de la Falaise, a celebrated fashion model and artists’ muse of the mid-20th century who was later a designer, food writer and the matriarch of a three-generation clan of international couture models, died on Thursday at her home in Saint-Rémy-de-Provence, France.

An English beauty with dark hair and high cheekbones, Ms. de la Falaise was for decades a trendsetter in London, Paris and New York society. She married a count, was captured by the world’s most eminent photographers and was a close associate of luminaries of fashion and art like Yves Saint Laurent and Andy Warhol.

Ms. de la Falaise was born into an artistic family on June 25, 1922, in West Dean, in the West Sussex region of England. Her name at birth was Maxine Birley. She was reared at Charleston Manor, the family home in West Dean, said to have been built in the 11th century for the cupbearer of William the Conqueror.

“She would make fish stew and sometimes would forget that she was making it for the garden,” Ms. de la Falaise told The Independent in 2004. “So she would add a bit of cognac, some garlic and spices. The roses would almost cry out with pleasure.”

Ms. de la Falaise’s first marriage, in the 1940s, was to Alain de la Falaise, a French count. During those years, she worked as a model for Ms. Schiaparelli and afterward created clothing for the French ready-to-wear designer Gérard Pipart.

Later settling in New York, Ms. de la Falaise was a food editor at Vogue. A friend of Mr. Warhol’s, she appeared in "Andy Warhol's Dracula”, an underground film he helped produce, and often cooked lavish meals for him and his retinue. (Ms. de la Falaise helped design the menu for the Andy-Mat, Mr. Warhol’s unrealized plan for an avant-garde automat.)

Over the years, Ms. de la Falaise designed couture, sportswear, ready-to-wear and boutique clothes for various houses; she also designed furniture and rugs. She was later a consultant to Mr. Saint Laurent’s licensees in the United States.

Ms. de la Falaise’s marriage to Count de la Falaise ended in divorce. She later married John McKendry, the curator of prints and photographs at the MET, and was known in private life as Maxime de la Falaise McKendry. Mr. McKendry died in 1975.

Her writings on food include the book "Seven Centuries of English Cooking"), reissued by Grove Press in 1992. Here in full is a medieval recipe that appears in Ms. de la Falaise’s book: “Take a crane, and unfolde his legges, and cut off his wynges and his legges, and sauce him with poudres of gynger, mustard, vynegre and salte.”