Fashion and Reality...Or Why Isaac Mizrahi Is Better Than You 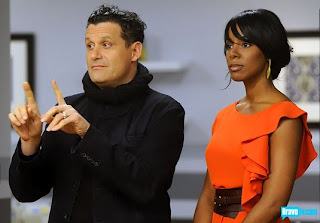 Oh hi, do you like this T-shirt I've wrapped around my neck as a scarf? Who cares, because you'll be making a dress out of it...in one hour. Kells, let's go down some martinis and TP Beyoncé's townhouse.

Last night was the premiere episode of Bravo's unimaginatively-titled, The Fashion Show. What we saw was basically Project Runway: The College Years. These designers are a little more, shall we say, advanced, in the industry, or at least that is what we are led to believe. They're all working designers, some with their own labels, looking to squirrel their way into the do or drop dead world of couture. And just look at 'em, the kooks: 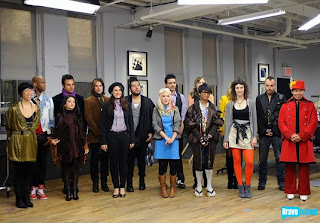 So far our favorites are the Yojimbo-looking mother fucker, the tranny with the feather and the other tranny with bad skin and wedge sandals. 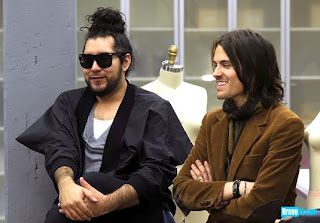 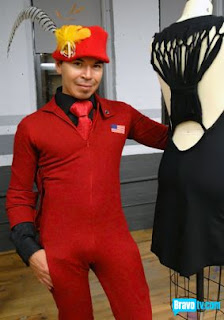 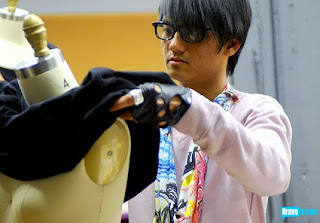 As soon as the kids awkwardly met each other, they were thrown to the wolves when Isaac announced they had an hour to make a little black dress out of a T-shirt. Thank Heidi for this challenge or else we might not have known that any of these gals had talent. Some of the dresses were stunning, the majority were not. But at least we could see that there was some talent floating around in a room drowning in forced eccentricity and bad taste. 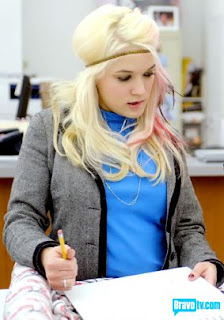 Case in point. A head band with the cotton candy hair? Really, Duffy?

Their first real challenge was to create a must-have item, which for some reason the producers felt a need to define at least three times as if the name itself doesn't give it all away. The samurai Johnny R chose the harem pant, the idea of which we were in love with. Imagine, a must have gold-lamé harem pant with a festive turban? Unfortunately, all of the luxe of the harem pant was drained and we were left with this: 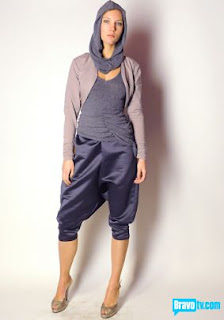 A little on the boxy side but we appreciate the effort.
Meanwhile, the other teams had a bolero, another fantastic idea made drab by poor choice of color, and a tube skirt, which just turned out highly unfortunate. 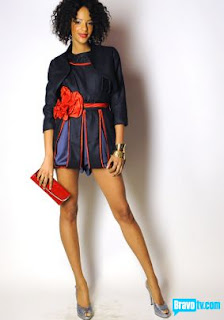 When in doubt, throw on a giant bow and call it a day. 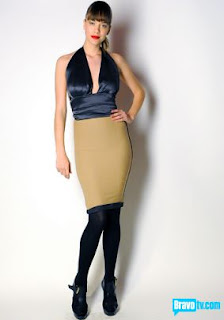 The show is worth it just to see this girl try and walk the runway in this abomination. One word: waddle.

In the end, our little wedge sandal won with this excellent look from the bolero team. 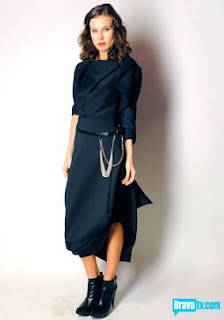 The coolest part of The Fashion Show is that that look is now available for public consumption on the Bravo.tv website. And at $199 for the dress, the price isn't bad at all...we just wonder how much from the sales the designer will reap.

The collections were primarily a bust, and Isaac let them know it, saying she felt embarrassed by what strolled down that runway. And do ya blame her? 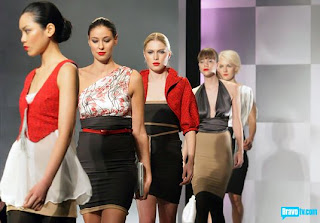 What the hell is this, amateur hour at Miss Sixty?
But it was the first show and we weren't appalled by it; rather we were vaguely interested, so we'll see how it goes. And PJ Runway doesn't premiere for months, so this summer we'll more than likely be sipping our Long Islands and popping our Xanax to Isaac and crew. But they're gonna have to work a lot harder to win us over.
| More
Posted by arms.akimbo at 2:55 PM

oh my god, so many great lines, "...drowning in forced eccentricity and bad taste," and "...amateur hour at Miss Sixty." Love the reviews.